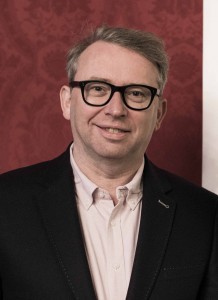 Oliver Lehmann, born 1964 in Vienna (Austria), accomplished a diverse and successful career as journalist, writer and science communicator before moving to science management. His postings as a journalist included the Berlin based daily newspaper taz, the Vienna city newspaper Falter, the art and travel magazine Merian, the weekly Stern (both Hamburg), News (Vienna) and the BBC Worldservice. In 1998 Lehmann founded Universum Magazin (then Austria’s leading popular science publication), whose co-publisher he remained until 2013. In 2007 Lehmann became the media spokesperson of the Institute of Science and Technology Austria, since 2015 he holds the position of Head of Stakeholder Relations at IST Austria.

Lehmann is board member of the Austrian association of education and science journalists since 2006. In his capacity as chairperson of the association (2012-2018) he commissioned the first comprehensive study on the training and the work situation of science journalists in Austria. Since 2014, Lehmann is chair of the organizing committee of the Vienna Ball of Sciences, one „of the (few) truly social, got-to-be-there events for the international science community” (Marc Abrahams, Annals of Improbable Research).  Lehmann is also author and publisher of numerous books, university lecturer, curator, and host of panel discussions and conferences related to the public understanding of science, e.g. the Vienna Summer of Logic 2014. In 2015, Lehmann completed his studies of history and linguistics at the Open University with a Bachelor’s degree (first-class honours). From 2016 to 2018 Lehmann served as Honorary Secretary of the European Union of Science Journalists‘ Associations (EUSJA). On April 22, 2017, Lehmann was chair of the organizing committee of the Vienna March for Science, one of 600 demonstrations worldwide for strengthening science in society.  Since 2021, Lehmann is member of the Board of Directors of the Chamber of Commerce for Switzerland, Austria and the Principality of Liechtenstein, and on the Board of Advisors for the Ig Nobel Prize. Move on to the publication list in German.