Known to the world as a metropolis of music, Vienna’s scientific research does not receive the international recognition it deserves. Changing this would require a new mindset, Pavel Kabat (IIASA) and Thomas Henzinger (IST Austria) agree when I interviewed them on January 7, 2016, for the Ball Magazine 2016.

Tucked behind the piano in a corner of the Café Landtmann, two prominent players in scientific research in Vienna, Professor Dr. Pavel Kabat, Director General and CEO of the International Institute for Applied Systems Analysis (IIASA), and Dr. Thomas Henzinger, President of the Institute of Science and Technology Austria (IST Austria), discuss the place of science in the city with Oliver Lehmann, Chair of the Ball Committee, over a cup of coffee in traditional Viennese style. The meeting point was chosen with care: it is almost exactly halfway between the IST Austria campus in Klosterneuburg and the IIASA home in the Laxenburg palace. 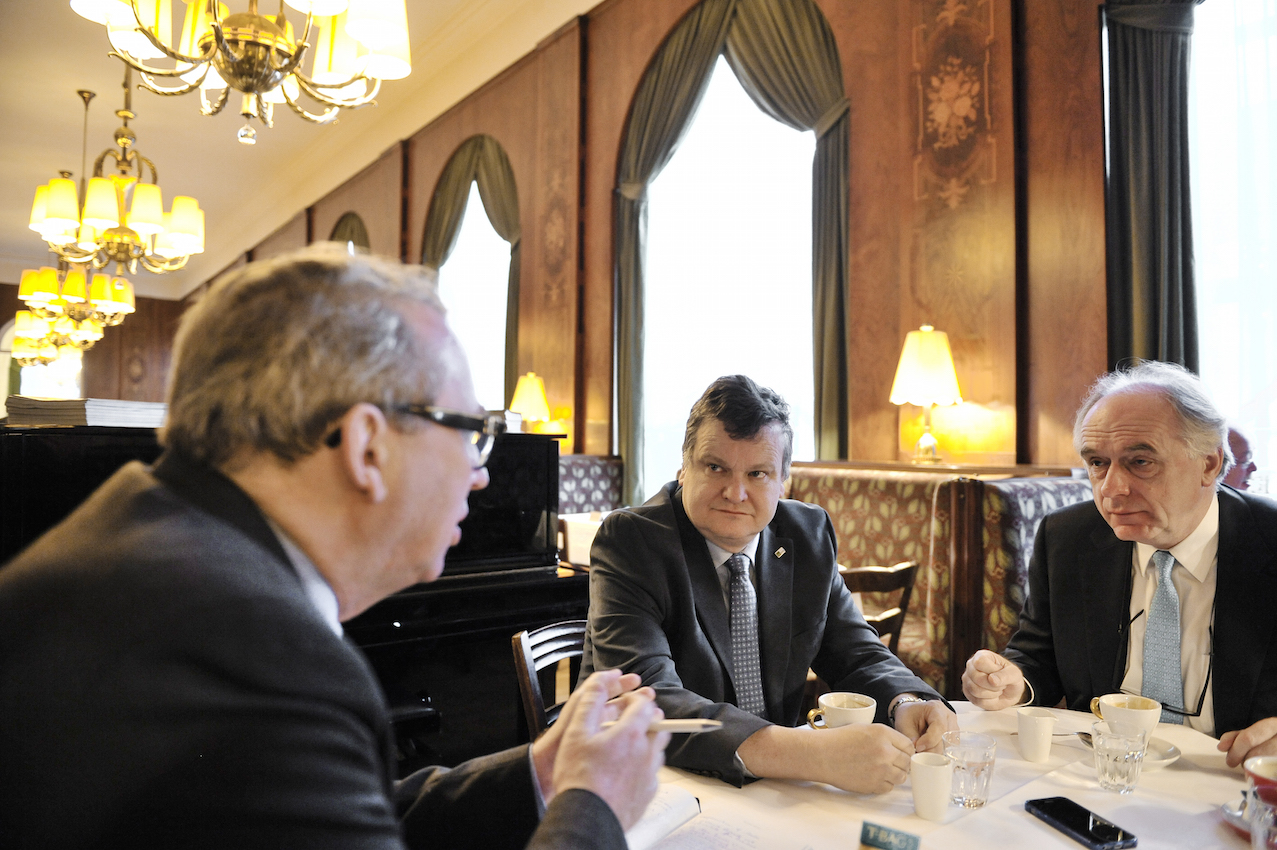 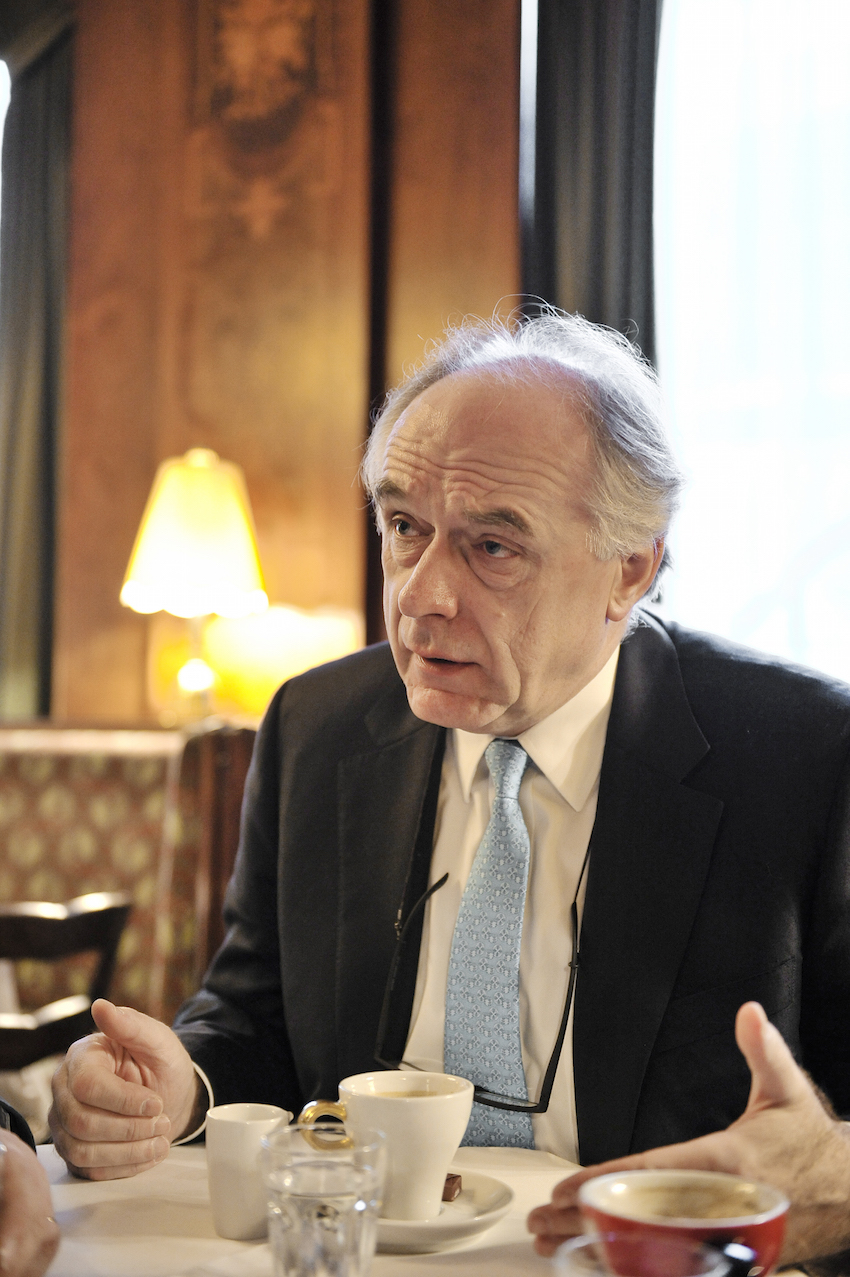 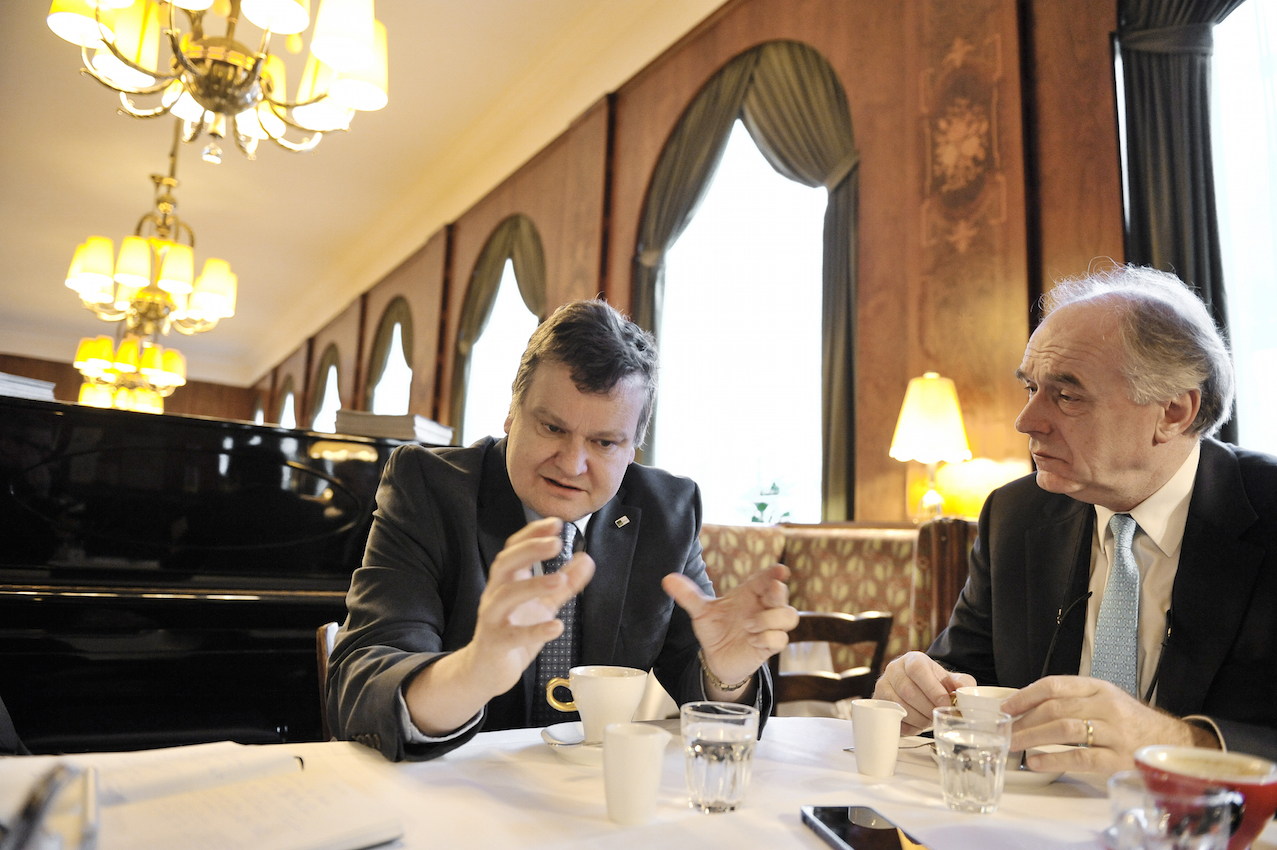 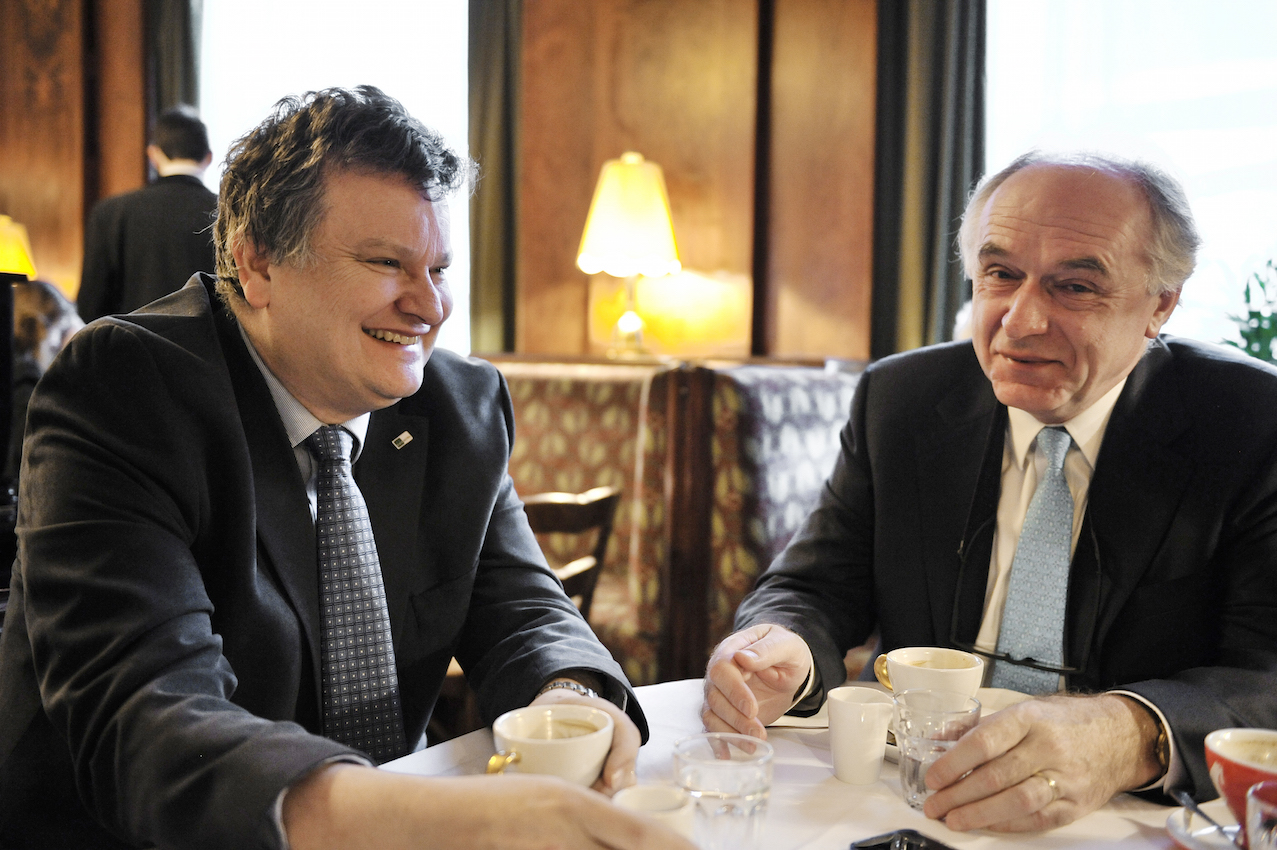 Lehmann: What do IIASA and IST Austria have in common and what sets them apart?

Henzinger: Our clearest common connection is world-class science. While the fields of research at the two institutions are not identical, they are complementary. And, most importantly, they both have the same aspirations in terms of the quality of science. Another key factor is that both institutes employ large numbers of international scientists. Attracting the best scientists from around the world and nurturing a diverse research environment is important to us.

Kabat: Yes, both institutions excel at creating dynamic, international research environments, continually seeking to get the best of the best. There are, of course, also big differences. At IIASA, we do a lot of applied research which has a direct delivery point, for example to policymakers in IIASA’s 23 member countries around the world. At IST Austria, there is perhaps more »blue-sky« research, driven by curiosity.

Lehmann: How does Vienna and its scientific research community benefit from the presence of the two institutions and vice versa?

Henzinger: Vienna is a hub for scientific research in Europe. There are a number of universities and institutions in Vienna and they all have an important part to play in the research ecosystem. In the end, everybody profits from this: as the critical mass of research grows it gets easier to hire people. It’s like gravity—big centres attract more of the best researchers from around the world. The Science Ball is a—uniquely Viennese—sign of this. We are now firmly »on the map«, and in Vienna you show that by hosting a ball!

Kabat: I agree. IIASA has a number of fruitful connections with Viennese institutions. For example, IIASA and OeAW have worked together to organise a series of public lectures and debates with renowned scientists for the Viennese academic and political community. Our scientific collaborations with researchers in Vienna and Austria as a whole are also very strong and have resulted in the publication of over 1,050 scientific papers since 2008.

What we hope to bring to science in Vienna is expertise in transdisciplinary research. IIASA specialises in connecting across fields, from mathematics all the way to sociology. This is not new in theory but in practice universities often separate these fields into distinct silos, losing opportunities for cross-fertilisation and new ideas. We also hope to aid research in Vienna with our experience in getting science into policy. Although we can all write research proposals on how important our results are for policy, very few institutions really know how to use their science to help policymakers. But at IIASA, we have hands-on experience, and we can use that to help our partners and collaborators.

Lehmann: Vienna is known as the »City of Music« because of its cultural legacy, but why is science not an important part of the city’s image as well?

Kabat: This is something close to my heart. IIASA is doing top-level science on transitions towards sustainability; the world is now at a cross-roads and we need to be taking steps in sectors from energy and water all the way to financial systems. Communicating this can be very difficult, so we are using new and unusual collaborations which are made possible by the fantastic Viennese environment. We are working with music, ballet, and the opera. We have partnered up with the Vienna Philharmonic Orchestra, for example, and with dancers from the State Opera in order to communicate these complex concepts. Science and the arts both have a vital part to play in Vienna’s past and future. I dream of a scientific tour through Vienna featuring collaborations between theatres, museums, and scientific institutions.

Henzinger: There is a lot of history between the golden age of science in Vienna and today, and I think huge efforts and lots of progress are being made in reviving Vienna as a city of science. Science, by its very nature, is one of the most borderless activities of humanity and it can only thrive in a completely open environment. It is no surprise that the glory days of science in Vienna were when it was the hub of a multi-national empire. I think we can only get back to that by becoming much more open-minded and much more international as a country.

Kabat: Yes, Vienna has all of the necessary ingredients, it just requires good cooperation and teamwork to turn opportunity into reality.

Lehmann: The city of Vienna is legally not responsible for science funding, but it is a central research hub and the biggest university city in central Europe. What can the city do to improve its image as a centre of scientific excellence?

Kabat: I think a change is needed in the portrayal of Vienna as a whole. There is promotion of music, dance, the arts, and initiatives like Smart City Wien to improve the design of the city. All these are great, but institutions like IST Austria and IIASA should also be used to show that Vienna really is one of the major science hubs of Europe and the world. Emphasising this would require very little investment but would benefit both Vienna and science in the city. In my view, Vienna has one of the brightest futures compared to other science hubs in Europe, because it is close to the border between Europe and Asia, between developed and developing countries. Vienna could be a key research centre for this part of the world, but the science and technology potential needs to be recognised and picked up by the city. All the components are here, what it needs is a coordinated effort and a vision.

Henzinger: Vienna has an enormous advantage in that it is known as a fantastic place to live, yet I see very little advertising that this is a welcoming place where you can enjoy a high quality of life. The city needs to actively attract not only world-class researchers but all kinds of science-related businesses and organisations. Vienna as a whole must make a concerted effort to advertise itself as an attractive location for students, companies, and professionals from all over the world.

Students do not know that, if they come to study at Vienna University, for example, they may also be able to benefit from collaborations with the international scientists working at IIASA and IST Austria, who may be able to advise or even co-supervise them. This dynamic and varied environment is a key part of what Vienna can offer, beyond the individual institutions. This ball is the perfect step in that direction. It is very clearly an effort that transcends any particular institution.

Kabat: We should continue this talk, not just with the two of us but with all leaders of Viennese scientific institutions and the mayor; to have a free and frank discussion. How about holding a conference, for instance? Science Forum Vienna, showcasing the cutting edge of Viennese research. Science brings a huge amount to the city of Vienna and it should be recognised. The ball, as you say, is an excellent occasion to bring together Vienna’s vibrant scientific community and celebrate it!