On February 9, 2016, I had the pleasure to host a panel discussion of the Austrian Association of Education and Science Journalists with Norbert Bischofberger and Josef Penninger at the Presseclub Concordia. This is how I presented the event to the club members: 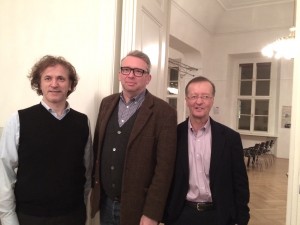 „’Going public‘ is an ambiguous term. It can mean seeking the attention of a lay audience in order to raise the awareness and attention for science in general and basic research in particular. It can also mean selling shares that were formerly privately held to new investors for the first time, otherwise known as an initial public offering (IPO). The two scientists Norbert Bischofberger and Josef Penninger know a lot about going public in every sense of the word. At the Klubabend on Tuesday, February 9, 2016, 6 pm, they will discuss the advantages and the pitfalls of the interaction between science and society, research and business.

Dr. Norbert Bischofberger is the Executive Vice President, Research and Development and Chief Scientific Officer at Gilead, located in Foster City (California), with 7.500 employees and a turnover of $ 24.5 bn one of the largest biopharmaceutical companies worldwide (NASDAQ: GILD). Dr. Josef Penninger is Scientific Director of the Vienna based IMBA and Wittgenstein-Laureate 2014.“

The Austrian Press Agency APA published a good summary of the discussion as did the business magazine trend (both in German).