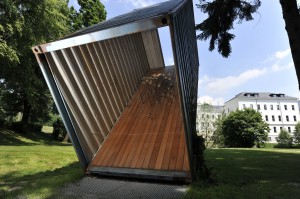 This afternoon, I had the honour to present the first IST Commemoration Lecture. All seats were taken in the lecture hall, mostly by young members of IST Austria. I was deeply moved by their focus and attention. Here are my words of welcome:

I welcome you to our first IST Commemoration Lecture. Our speaker this afternoon is Herwig Czech. The title of his lecture is ‚Nazi Medical Crimes at the Psychiatric Hospital Gugging‘. I suppose, you all know the memorial which is dedicated to the victims of these crimes. The tilted container right next to the pond symbolizes the total upheaval of humanity and the violent disruption of life.

It is the intention of the IST Commemoration Lectures to introduce the members of the Institute and the public to the past of the compound and, on a wider scale, to aspects of the history of science requiring remembrance and reflection. The subject of this first lecture is not easy to comprehend. Nevertheless, I am convinced that it is necessary for us to face this part of the compound’s past for us as human beings – and as scientists.

Herwig Czech is a Permanent Research Fellow at the Documentation Center of the Austrian Resistance and the recipient of an APART Fellowship of the Austrian Academy of Sciences. He studied history in Vienna where he also completed his doctoral studies. Czech conducted research at Yad Vashem in Israel, Duke University (North Carolina) and the Institute for Human Sciences in Vienna, to name a few of his postings. His work has been appreciated with awards such as the Herbert-Steiner-Prize, the Science Award of the City of Vienna and the Theodor-Körner-Prize.“

Some background: In 2007 the Executive Committee of IST Austria commissioned Herwig Czech to undertake a study on the Nazi medical crimes in the psychiatric hospital in Gugging. The paper was forwarded to the artists participating in the competition for the campus memorial as a starting point for their deliberations. In the spring of 2008 an international jury chose the project designed by Dorothee Golz. An update of the paper wil be published in February 2015.

For details on Czech’s lecture see the article by the Austrian Press Agency.