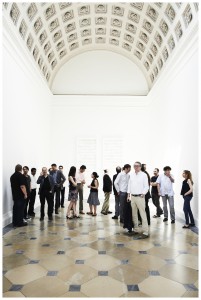 Preparing for the profil cover shooting at the Theseus temple in Vienna / Photographer: Phliip Horak / Click to enlarge

A brief reflection on the Vienna Summer of Logic 2014. Communicating the science of 2500 logicians did not sound like an easy task in the first discussions with Helmut Veith in the summer of 2013. Logic does not lend itself to easy comprehension as it deals with a truly complex challenge: the science of correct reasoning. There are no impressive images, no flashy videos, no witty one-liners to attract a general audience and journalists in particular. The reasons why this task turned out to be a fantastic experience are basically the following:

Working with a group of dedicated scientists and administrators who trusted in meticulous planning and in makeshift improvisation – always at the right time.

Experiencing the support of friends and acquantainces in academia and media who agreed to back and develop the idea of the LogicLounge as meeting place for friends of logic in the very public of a trendy club (the Cafe Bar Restaurant Heuer) in the centre of Vienna (the Karlsplatz).

Encountering a curious public and journalists who were willing to spend more than the usual attention span on a subject that does not give itself away to a superficial scan.

Many lessons are to be learned from this experience. Maybe the most important is that there is no scientific field that cannot be communicated providing the right partners are working on the right ends of the communication spectrum.

A special treat was the shooting of the cover photo for the July 7 edition of the Austrian current affairs magazine profil congregating 21 logicians working in Austria at the Theseus temple in Vienna’s Volksgarten. Photographer Philip Horak managed to capture the spirit of the intense, yet effortless discussions, writer Heinz Wallner explained the central fields and challenges on five double-spreads. The names of the logicians can be found on the Public Events section of the VSL homepage. As an extra Philip took a picture of me with the logicians as backdrop which is as flattering as it is impudent. I nevertheless place it here as a dear souvenir of a truly dazzling experience.

For more on the Vienna Summer of Logic go and see the superbly tended website.