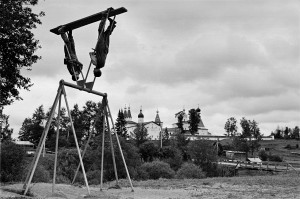 Emil Gataullin, Russia, „Towards the Horizon“.
Click to enlarge

On Monday, September 15, the Alfred Fried Photography Award was adwarded at the Austrian parliament. This year’s award for the world’s best picture on the theme of peace went to Emil Gataullin (Russia) for his image „Towards the Horizon“. The award ist named after the  Austrian pacifist and author Alfred Hermann Fried (* 11 November 1864, Vienna; † 4 May 1921, Vienna). As founder of the journal Die Waffen nieder! (Lay down your arms!) and other peace activities, Fried received the Nobel Peace Prize in 1911. Lois Lammerhuber, one of the organisers, asked me to contribute a text to the award’s website on what peace looks like. Here it is:

„A dark TV screen, a silent radio, a computer without an internet access. This is what the absence of war looks like nowadays. The moment we connect to the world by means of media we are overwhelmed by the images of people in despair and of perpetrators displaying their disgusting acts of inhumanity with blatant delight. Never before has the contradictory dichotomy of information and propaganda been so evident and confusing, resulting in a thorough distrust in any kind of image permeating our sphere of assumed privacy which in itself has become an illusion. And never before has the demand for sobriety and serenity been more important, even vital in order to avoid the trap of one’s own prejudice and misconception. Possibly the only way to evade this seemingly inevitable tension is to engage in a conversation with a fellow human being for the sake of enlightenment and illumination, knowledge and – if necessary – consolation. So peace might look like this and most certainly begins like this: two people having a thoughtful conversation.“

The award is organised by the Photographische Gesellschaft (PHG) and Edition Lammerhuber. The PHG, founded in Vienna in 1861, is the longest-standing photographic society in the German-speaking countries and the second-oldest in the world.  Lois Lammerhuber is an Austrian publisher dedicated to photography and to the interpretation of science and art.